For our latest project we are exploring the life of the inspirational Emily Langton Massingberd, women’s rights campaigner and former owner of Gunby Estate, Hall and Gardens. The project is being supported by the National Trust and forms part of their 2018 year long celebration of Women and Power, marking the centenary of female suffrage.

We are planning to create an installation in Gunby Hall’s Orchard Gallery celebrating the spirit and achievements of this pioneering 19th century female, whose mark can still be seen around the Gunby Estate today. Founder of the first female members’ club, the Pioneer Club, social campaigner and ardent temperance activist, her time in Lincolnshire saw her narrowly miss obtaining a seat in the first County Council Elections in 1889, for which, as a landowner she was able to stand.

The installation will surround the visitor in a series of contemporary objects brought together as playful reflection of Emily’s time at Gunby and significant life achievements. The exhibition, which will take place in August, will complement historical displays and events marking Emily’s life in Gunby Hall throughout the year and will offer a creative visual interpretation of the personality behind her accomplishments. The intention is to offer the visitor the opportunity to consider her unconventionality, energy drive and confident nature.

Us, A Gunby Estate Domesday

A Project in partnership with artist Michael Sanders and the National Trust at Gunby Estate, Hall and Gardens.

During spring and summer 2017 artist Michael Sanders, supported by CommonAs, worked with the members of 28 households living in tenanted properties in the grounds of the National Trust property, Gunby Estate, Hall and Gardens, to create a modern day ‘Domesday’, or landscape survey, of the estate, revealing the untold stories of the estate cottages, working farms, park and woodland. Research for the project included gathering audio testimony from tenants and creating photographic portraits. The project culminated in an installation and exhibition in the Orchard Gallery at Gunby Hall.

The project aimed to compile a compelling record of a moment in time, drawing upon the rich but sometimes overlooked history of the Gunby tenants, of whom Michael Sanders is one.  It was the intention that the gallery installation act as an alternative guide to the estate. It include at its core a three dimensional model village, surrounded by portraits and storied from current tenants. Together they invited visitors to explore the wider estate from a new perspective.

The project has been made possible with funding from the National Lottery through Arts Council England.

A Ballad for Southwell
Update, January 2017: Videos of the works created as part of this project, performed live by Chris T-T at The Workhouse, can be seen on our Vimeo channel
The finished works are available to on Soundcloud https://soundcloud.com/commonas

A Ballad For Southwell. A project working in partnership with musician Chris T-T and The National Trust at The Workhouse, Southwell, to produce a contemporary musical work responding to this unique heritage site, and engaging new audiences in its fascinating history and contemporary context. CommonAs co-ordinated the project working with Chris T-T, who collaborated with site volunteers, visitors and wider community groups to produce an original creative audio work. The finished piece was shared via live performance, digital download, an illustrated ballad sheet and on the Workhouse audio visitor guide. The project was made possible through support from Arts Council England Grants for the Arts.

The project formed part of the National Trust’s Re-imagining The Workhouse programme and is devised and curated by CommonAs.

Comments from participants in the project:
‘For me it has been a great experience. I have been a reseracher here for 19 years. It is easy to get stuck in a rut. This project has given me new insights into how some of the research can be used in new ways. .. It has been good to work with him and CommonAs – Lesley & Darren. They have been inspiring to us and I think we have been a valuable source for them. – Volunteer Researcher for the National Trust at The Workhouse, Southwell’

‘It felt very true to the research about people in and of The Workhouse but with a modern edge, making more widely relevant or accessible today. – Freelance Consultant Curator for The National Trust’

Chris T-T live at The Workhouse ‘Oakum 1’ from CommonAs on Vimeo.

Stille-Fragemente, 2012, collaboration between artists Katja Hock and Emma Cocker, Lesley Farrell, and designer Kathryn Coates.  A photographic and video project created in public woodland on the site of a former mining colliery in Bestwood Country Park, Nottinghamshire, exploring the relationship between the visible and the imagined. Members of the public were invited to contribute their images and memories of the area through a series of public events. The outcomes of the project were shared via a publication and exhibition at Djanogly Art Gallery at the University of Nottingham  www.stile-fragmente.co.uk

Silent Witnesses: Graphic Novels Without Words, 2010. An exhibition of textless graphic novels, for The Collection, Lincoln, curated by Darren Diss and project managed by Lesley Farrell, which brought together the work of internationally recognised artists and illustrators from around the world working in Graphic Novel form. Spanning publications from the early twentieth century to the present day, the works contained in the exhibition were distinct in that all use the capacity of images alone to communicate narrative, functioning entirely without the use of text. http://silentgraphicnovels.blogspot.co.uk

Image from the exhibtion Silent Witnesses at The Collection, Lincoln.

The Noah Laboratory (Constructing Soil), John Newling, 2009. A project developed by artist John Newling and curated by Lesley Farrell, following a period as Artist in Residence with The Collection, Lincoln in 2008. As the final stage of the project, over the course of a month the gallery at The Collection formed the central distribution hub and recycling point for a newspaper containing the images and writings generated from the residency and, through the installation, endeavoured to transform the some of the papers into soil. The Noah Laboratory. 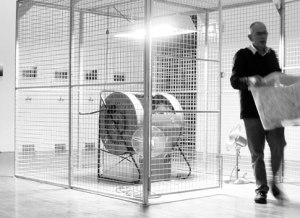 Image from The Noah Laboratory, by John Newling.